The next New Zealand summer heatwave is developing, and the expected impacts are extremely likely to be intense according to Wise Response scientists. 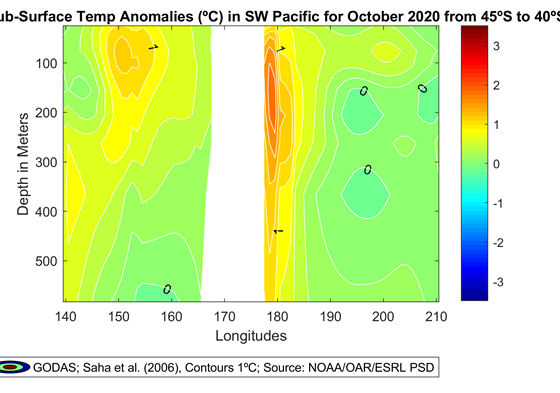 The team monitoring its progress have found that sub-surface sea temperature anomalies east of the South Island and southern North Island were up to a massive 3°C above average a depth from 100 to 250 metres for October 2020. This represents marine heatwave conditions. West of the South Island these have been about 1°C above average in the central Tasman Sea.
Already scientists at the University of Otago Marine Sciences have noted mortality in young, yellow-eyed penguin chicks because the blue cod, unlike smaller fish species the adults catch, are too large to be digested.
The big marine/land heatwave of 2017/18 gave New Zealand its warmest summer and the warmest January on record. It covered an area of four million square kilometres (comparable to the Indian subcontinent), including the land, the eastern Tasman Sea and the Pacific east of New Zealand to the Chatham Islands.
The warm conditions caused massive ice loss in South Island glaciers, estimated to be the largest annual loss of glacier ice in nearly 60 years of records for the Southern Alps. Marine ecosystems were significantly disrupted. Coastal kelp forests struggled to grow in the warm sea. In southern New Zealand, the temperature threshold was breached three times, resulting in substantial losses of kelp canopies. For the first time, Atlantic salmon had to be imported as farmed fish died in salmon farms in the Marlborough Sounds. Commercial fishers reported that snapper was spawning approximately six weeks early off the South Island coast.
October was the fifth warmest on record, and November temperatures were 0.9°C above average.